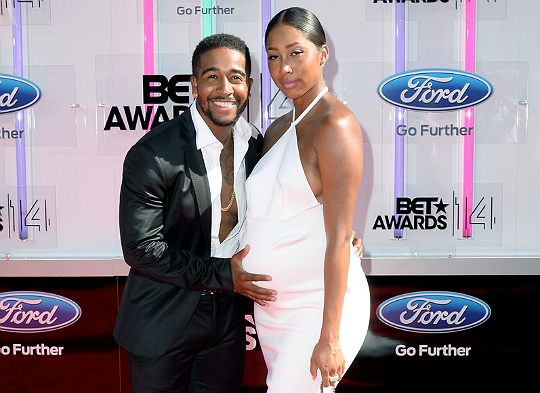 Omarion and girlfriend Apryl Jones showed up and out at the 2014 BET Awards at Nokia Theatre this past weekend. The singer and his girlfriend posed and kissed on the red carpet while photographers took pictures of the happy couple. Omarion was the joyful father-to-be who kissed his girlfriend’s tummy as she posed in a beautiful white gown. Apryl had a pregnancy glow that radiated in every shot.

This year’s BET Awards was the place to be with top-notch performers and surprises at every segment. Pharrell Williams opened the show with ‘Come Get It Bae,’ and was the recipient of two awards. Beyonce and Jay-Z, who are currently touring together, won an award for best collaboration for the hit single ‘Drunk Love.’ Queen Bey was also named best female R&B/Pop singer of the year before closing out the show with an unforgettable performance of ‘Partition.’

The 2014 BET Awards took place on Sunday, June 29, 2014. Omarion and Apryl are expecting their bundle of joy, a baby girl, to arrive in coming weeks.