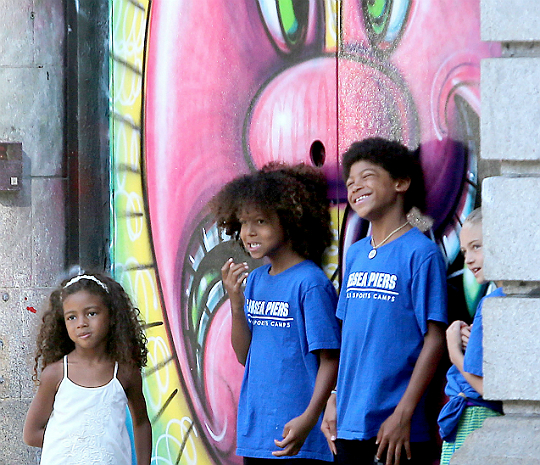 The Klum kids are picture-ready. Lou, Henry, Johan, and Leni were recently photographed outside of their apartment building in New York. The kids stood by a colorful mural as grandma Erna and others took pics. Heidi Klum is said to have posed in front of that same mural just a few days prior. The apples don’t fall far from the tree!

There is much speculation surrounding Heidi and ex-husband Seal’s relationship, after the two were recently spotting holding hands. An eye witness told InTouch Weekly that Heidi and Seal dined at a restaurant in Santa Monica with their children, and were more than cordial with one another. “They were all over each other,” said the source. “They were holding hands and kissing. They looked like newlyweds!”

Only time will tell if the eyewitness was correct in observation or if they stretched the truth a bit. Heidi Klum and Seal parent four kids together. The couple moved for divorce in 2012.