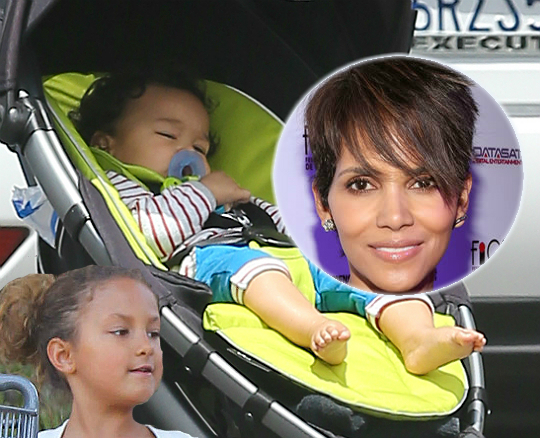 Halle Berry has nailed the working-Hollywood-mom gig. Now starring in and acting as executive producer to the Space series, Extant, Halle has multi-taking down to a tee.

It’s simple, bring your kids to work. The award-winning actress and mother of two finds it easier to have six year old Nahla and 8 month old Maceo with her during the day. Halle told People magazine, “I love having my kids there [on set] because I am nursing my baby. To have him there is great for me”. She added, “I love being involved all day”. Maceo’s daddy, Olivier Martinez, on the other hand may find it a little more difficult to multi-task. The new father said, “Every morning I can lose myself just by looking at my son”.

The recently married couple gave their first public appearance together in over a year at the premier of Extant earlier this week. But just because they haven’t been together much in the public eye, does not mean they aren’t happy. Rumors that the marriage has been on the rocks were quickly debunked by Olivier. The happy husband boasted, “Sometimes you have to laugh about what gets published, sometimes it’s annoying, but in general I don’t care.”

Merging family and work obligations doesn’t end with Halle, though. Soon enough the family will be heading to Mexico, where Olivier will be working for a while. “We’ll be following him there to keep our family all together,” the actress told Us. “That will be fun and will be a good experience for the kids.”