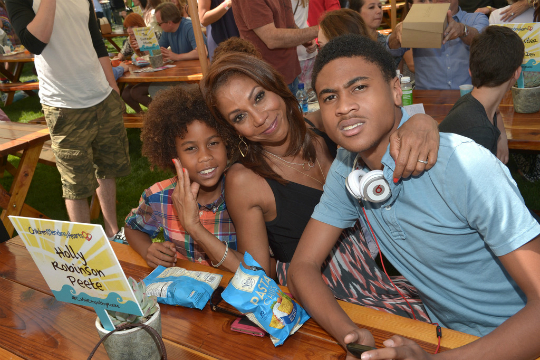 Holly Robinson Peete is passing on her spirit of giving back. This past weekend she and two of her four children, Roman and Rodney Jr. ,  attended the 6th annual fundraiser, “Empathy Rocks: A Spring into Summer Bash”. The event is held by the Children Mending Hearts Foundation, which is dedicated to getting the youth of America involved in global citizentry and showing them how their creativity can effect positive change in the world.

Since its founding in 1998, CMH has been expanding the minds of children through various arts programs designed to help them become Global Citizens. The programs include, photography, drama, dance, and more. Specifically, the foundation looks to empower children who are used to being victimized by giving them a voice and showing them how powerful that voice can be.

The webpage reads, “Our goal is to approach emotional and intellectual poverty and conflict resolution in a new way and to change the lives of disadvantaged and at-risk children in America and abroad.  Children’s voices are louder, literally and figuratively, than adults. They are not jaded and can see the possibilities. The only thing that separates children here and abroad is geography and circumstance.  They are both refugees in their own societies.  Together we can impact changing the direction of their future by helping the world hear their voices.”

But it’s no surprise Holly is getting her children involved in philanthropy. The actress has been well known for her activism for quite some time now, as she has been an advocate and spokesperson for autism and autism related issues since her first son was diagnosed at age 3. She and her husband, Rodney Peete, were inspired by their family issues to begin the HollyRod Foundation, and she has been working hard for the cause ever since.

As a successful spokeswoman for her foundation, and autism awareness in general, Holly has partnered with many familiar brands such as Target, Toys R’ Us, Epipen, and more. Presently, she is running a campaign in collaboration with AT&T which is aimed at providing tablets to children whose communicative skills are drastically affected by autism. This program,“Gift of Voice”, will be collecting donations until the end of the month.

Posing here at “Empathy Rocks” with Rodney Jr., and one of his younger brothers, Holly radiated pride for this family moment. It’s certainly not the first time her children have taken part in her activism. In 2010, she and her daughter co-wrote a children’s book entitled My Brother Charlie which aimed to help children positively understand autism as a condition, and what living with autism looks like.

The Peete’s are definitely doing their part; participating as a family in this CMH fundraiser is undoubtedly an important step towards accomplishing the foundation’s goal. As the webpage states, CMH is fighting to create a “connective tissue between children in various cultures and produce a new generation with a global vision motivated by a more peaceful impulse; children who will shift from seeing others through the prism of us and them, to a vision of we.”