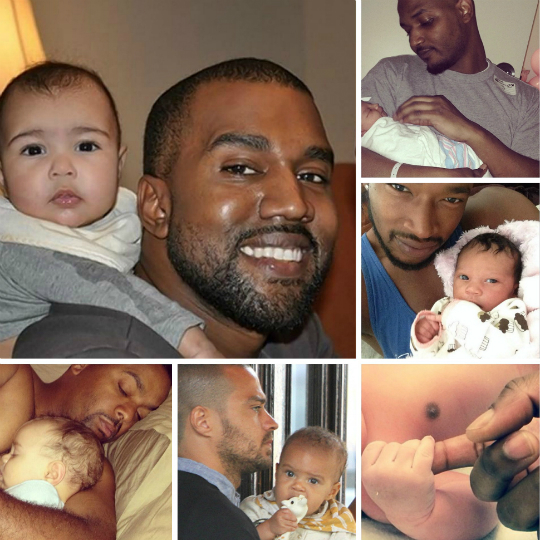 Father’s Day is here and some dads are celebrating the holiday as first-time parents. Here are a few of BCK’s first-time fathers.

It’s a special Father’s Day for Kanye West whose baby girl was born  on June 15th last year. So this day also happens to be baby North West’s first birthday!

The musician and then-girlfriend Eva Marcille welcomed a baby girl named Marley into the world on January 31, 2014. Kevin told Instagram fans that his daughter “came out fighting the nurses!”

Jesse and his wife Aryn became parents just in time for Christmas as their daughter, Sadie, was born last December. “It’s hard to describe,” says Williams of fatherhood. “It’s wonderful — a new discovery every day. It’s great and I’m loving it.”

Where’s Mike? Enjoying fatherhood. The celebrity welcome his and girlfriend Vanessa Simmons’ first child into the world on February 13, 2014. Vanessa served baby Ava Marie an eviction notice just one week before the little one made her grand entrance into the world.

The rap star is the most recent celebrity to experience the joys of fatherhood, as he and fiance Ciara welcomed their son, Future Zahir, into the world last month. Little Future weighed a healthy 9lbs and 10oz, at birth.

Ealy surprised us all when he revealed that he had a son during an interview with Steve Harvey earlier this year. Steve asked Michael if he hoped to have children with wife Khatira Rafiqzad when the star revealed, “We have a son.” The actor also added, “I never understand why people announce the birth of their children.”

Happy Father’s Day to all of the dads!