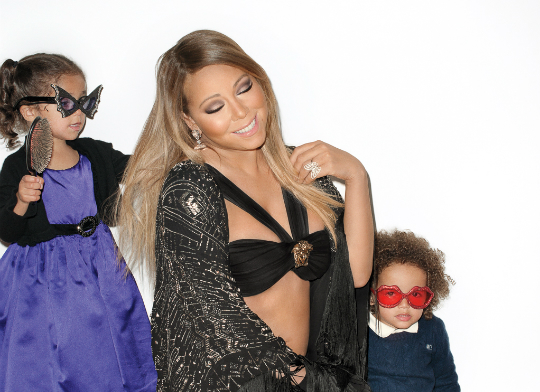 Mariah Carey, along with her kids, was recently photographed at Terry Richardson’s studio.

The award-winning pop star was there to shoot a spread for Wonderland magazine in which she unleashed her sexiness in the way we have all come to expect of her. The issue was released on April 29th. In three stunning black ensembles, Mariah dazzled the camera, but Richardson also made time to snap a few behind-the-scenes photos. In this photo, Mariah can be seen lavishing in her day of fashion and style as her little girl brushes her hair – no doubt preparing her for her glamour shot. Meanwhile, son Morroccon sits patiently nearby.

Mariah’s children, Monroe and Moroccan, are fraternal twins and were born to her and singer husband Nick Cannon back in 2010. With her new album set to drop later this month, she has to be awfully busy these days. This will be her 14th studio album, titled Me, I Am Mariah… The Elusive Chanteuse.

DIDDY AND HIS GIRLS ARE 'LIVE' FROM DC

A CELEBRITY BABY BLOG: 'MOM, YOU'RE THE GREATEST'

A CELEBRITY BABY BLOG: 'MOM, YOU'RE THE GREATEST'