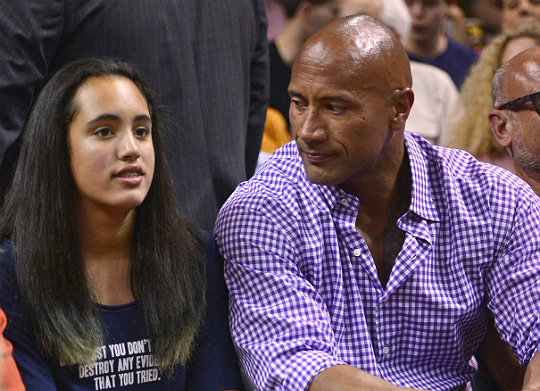 Dwayne Johnson and daughter Simone spend father-daughter time together. The ‘Fast & Furious’ star looks lovingly upon his daughter as she converses wit him.

Dwayne was one of the first stars in Hollywood to give his condolences to the Walker family upon hearing of fellow co-star Paul Walker’s death. “Not surprisingly, when I got the news that he had passed away, the first words out of my mouth were, ‘He has a daughter,'” said Johnson who told media that his friendship with Walker grew because of the love he and the star had for their daughters.

“When I first met Paul, I think in our late 20s, we were young kids in the business,” explained Dwayne to Entertainment Weekly. “Then, years later, when I did Fast Five, we had an opportunity to spend a lot of time together and become reacquainted. At that time, we had both been in the business…for over a decade, and the most important thing that we had in common was the importance of family time and being a great father to our daughters. We bonded over that. It was always the number one topic we would talk about. We would talk about silly guy things, his fast cars and my pickup trucks, or we would talk about the beautiful energy of Hawaii, but it always ultimately came back to family.”

Paul Walker passed away last year after being injured in a horrific car accident. The ‘Fast & Furious’ star had one daughter named Meadow who was 15-years-old at the time of his passing. Simone is Dwayne Johnson’s only child with ex-wife Dany Garcia.

KYLA PRATT IS A MOM...AGAIN!

KYLA PRATT IS A MOM...AGAIN!