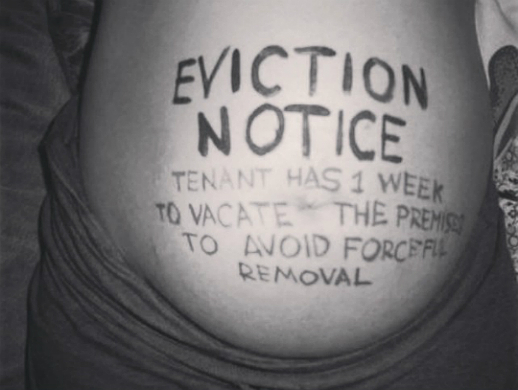 Vanessa Simmons is serving her little one an eviction notice, telling her that she has one week to vacate or else. The reality stay recently shared a picture of her bump with Instagram fans, having writing on it that was strong and clear. “Eviction Notice. Tenant has one week to vacate the premises to avoid forceful removal.”

Vanessa announced her expectancy a few months back and celebrated a spectacular baby shower in January. The daughter of Rev Run had everything from cool decorations to candy for all at her party, closing out the event with a beautiful cake that had three tiers. Vanessa had her boyfriend and child’s father, Mike Wayans, by her side while being showered with love. The star told media that the party was “such a joyous event for Mike and I and our families. The room was filled with so much Love and Laughter all in Honor [of] our lil Angel.”

Mike and Vanessa are expecting their first child together. The couple’s daughter is due any day now.