TORREY SMITH AND WIFE ARE PREGGO 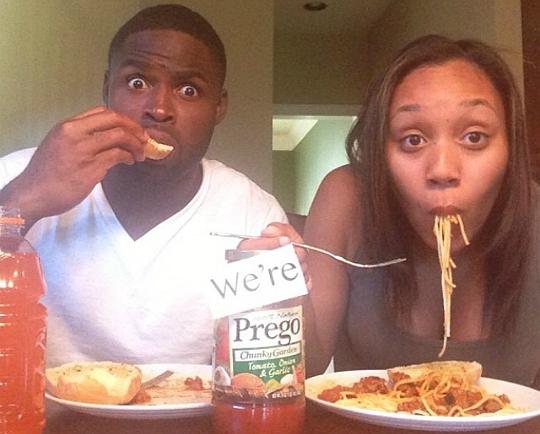 Torrey Smith and wife Chanel are having a baby! The loving couple announced their expectancy via Twitter on Monday (September 30) with the help of Prego’s spaghetti sauce.

Torrey and Chanel sat in between the jar of sauce, eating while giving off a look of shock. The couple placed the word, “We’re” atop the brand name for a message that ultimately read, “We’re Prego.” Torrey later tweeted, for those of us who didn’t get the humor the first time around, “Hahahaha yep we’re pregnant.” Cute.

The Smiths wed on July 11, 2013 after several years of courtship. Torrey began his career as a wide receiver for the Baltimore ‘Ravens’ in 2011 after years of playing football in high school and college.

Torrey and Chanel are expecting their first child together.

VANESSA SIMMONS TALKS PREGNANCY CRAVINGS, HER DAD'S REACTION TO HER NEWS AND MORE