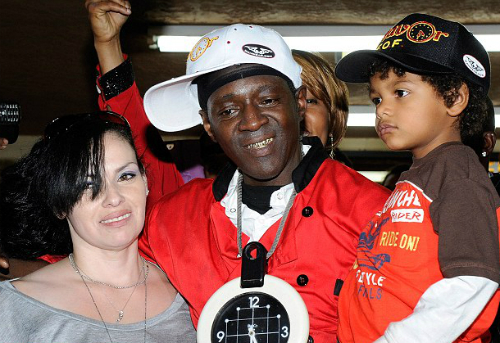 Are Flavor Flav and fiancee Liz Trujillo expecting a child? It would appear so. The two were recently featured on VH1’s ‘Couples Therapy,’ where Liz was acting strange just before going in to take a pregnancy test. Shortly after the exam, Flavor and Liz made the announcement that they were having a baby.

Liz was hospitalized during earlier days of filming the reality show due to extreme exhaustion that was mistakenly cited as drug overdose. Dr. Jenn Bermann, the medical professional who treated Liz, came to the reality star’s rescue in telling media that Trujillo had a lot going on at the time of her being hospitalized. “I do think viewers are starting to get a clearer picture of why Liz is the way she is,” said the doctor. “From her severe childhood abuse, to her relationship with Flav, and now knowing she is pregnant and hormonal and dealing with the stress of their relationship conflicts, it’s just a lot. She was under a lot of stress.”

Flavor Flav and Liz already have son Karma. Flavor Flav has seven children in all.