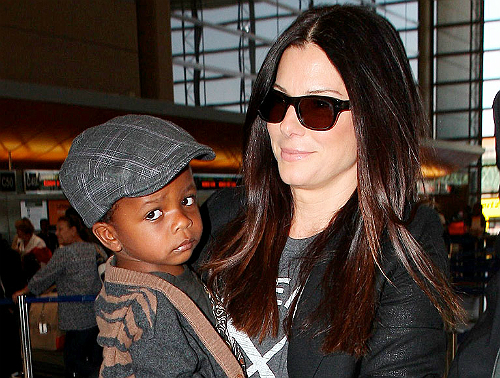 Sandra Bullock has set the record straight for everyone who ever though her son was a mean kid. The actress recently told Parade that her son is not mean but really dislikes the paps.PHOTOS: Louis Bardo dress like an Astronaut for a day

“I instinctively throw things over Louis’ head….He doesn’t like [the paparazzi],” said Bullock. “He gives them the stink-eye, and they’re like, ‘That’s such an angry kid,’ but I look at them and say, ‘Only when you guys are around’…I don’t raise Louis in Hollywood. I raise him in my world. To me the good thing about living in L.A. is diversity in lifestyle choices, color, and religion. I want Louis to look around and see every color under the sun. I also have the luxury of splitting my time between L.A. and Austin.”

Although she is doing everything within her power to give Louis a wonderful life, Sandra sometimes wonders of she’s a good mother. “I don’t know if I feel like a bad mom, but at the end of the day I’m always plagued with, did I do enough? Should I go in a different direction? But I also know that my entire life revolves around Louis,” explained the actress to Parade.

Sandra and her tot recently did a photo shoot with Vogue magazine that featured him as an astronaut. Louis was adopted by Bullock in 2010. He celebrated his 3rd birthday in January of this year.

CONGRADULATIONS: MIMI, SHAYNE, AND OTHERS GRADUATE

CONGRADULATIONS: MIMI, SHAYNE, AND OTHERS GRADUATE