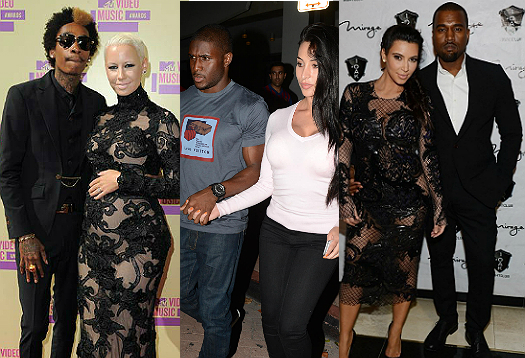 With Kim Kardashian and Kanye West making their amazing announcement of expectancy, we’ve decided to put together a list of a few other celebs waiting for their bundles of joy to arrive this year. Here are just a few power couples expecting little boys and girls to arrive this year.

Amber Rose & Wiz Khalifa- Amber and Wiz made the announcement last year after leaving fans in wonder for a bit. Amber is now engaged to Wiz and in her final trimester of pregnancy. Her and Khalifa’s son, as announced by Amber via Twitter, will be the couple’s first child together.

Eve- Although not confirmed by the rapper, a family friend revealed that Eve is three months into her pregnancy with her and boyfriend Maximillion Cooper’s first child. In addition, Eve was recently spotted out and about in London sporting what appeared to be a baby bump.

Cree Summer- The actress and her husband, Angelo Pullen, are expecting their second child together. Cree recently revealed that she is pregnant with a girl, making it the second time around that she will give birth to a girl.

Reggie bush– The Miami ‘Dolphins’ running back recently confirmed his and girlfriend Lilit Avagyan’s expectancy saying, “I have a little one on the way. We’re pretty excited. We haven’t found out if its a boy or a girl.  It’s an opportunity to raise a child. That’s the most special gift for a man and a woman.”

TJ Holmes- The ‘Don’t Sleep’ host and his wife, Marilee, are expecting their first child to arrive some time this month. He recently told The YBF.com, “Marilee and I will welcome our first child in a couple of months. We have had two blessed years of marriage, and now, we are so excited to grow our family.”

Lola Monroe– The rapper and her boyfriend, King Los, shared the good news with social media on Christmas Day with King tweeting, “Christmas 2012 with @thee_lolamonroe + 1 …Best gift of all !!!!”

Phaedra Parks- Phaedra and her husband Apollo recently bumped around the Bahamas, proudly showing their expectancy. The little boy or girl will be the couple’s second child together.