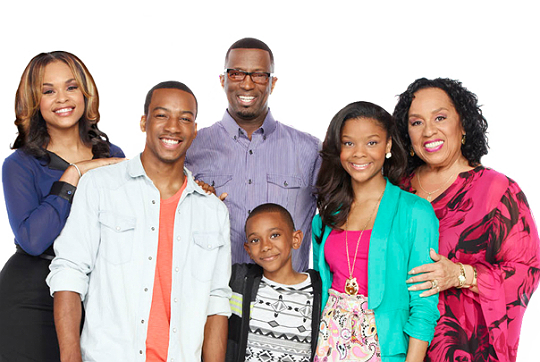 Rickey Smiley is a busy man who works hard for his kids. As a single father of two, Smiley juggles between stand-up comedian gigs and obligations that come along with having a nationally syndicated radio show. Rickey recently added Dish Nation host and star of ‘The Rickey Smiley Show’ ‘The Rickey Smiley’ television show, set to air on Tuesday, September 18, 2012, to his resume. The actor and comedian recently took time out of his busy schedule to talk with Blackcelebkids.com about his new ventures and family life.

What are you currently working on?

So tell us more about that.

“It’s a sitcom based on my life. I’ve been doing comedy for 23 years [as a] single dad, work[ing] at the radio station, so that’s what the comedy’s about. The only difference is, it’s really hilarious. [The show primarily talks about] some of the tasks and the different things that come with raising kids, and just having a house full of kids. [It addresses] the challenges and the trials and tribulations and the good times, everything that comes with that. [We took] a lot of those personal stories and put it into a script, and made it funny and entertaining.”

How do you balance between work and home?

“It’s really not hard. Most of the time I take my kids to work with me. Over the past 24 years I have raised about 10 children (2 biological and 8 who have been taken in as his own), which some of the kids are grown now. All of them are mine because some of my babies I’ve had since they were 1 [years old]. I just kind of keep them with me, and we do a lot of stuff. I don’t overbook myself and put myself in a position where I don’t have time for them. We have vacations every year, we spend time at the house, we watch movies, we go to Walmart. We do everything.”

What inspired you to do the show?
“It was an idea that my manager had. I’m kind of nonchalant about it because I was cool doing stand-up and radio, but she said ‘Hey let’s do a sitcom.’ I thought about it and we hooked up with Roger Bobb who did ‘Meet the Browns’ and ‘House of Payne;’ Tyler Perry’s right hand man. And we just made it happen and shot it, and here we are.”

Nice. So your show is coming on Tv One on Tuesday at 9/8 EST, correct?
“Right, and it’s funny. I play a lot of characters. It’s a mix between the ‘Cosby Show’ and ‘Martin.’ So you’ll get the loving dad like Bill Cosby and the crazy stuff that Martin did when I get into those characters [and doing] different stuff with Ray J and J. Anthony Brown. As the weeks go by the show is going to get better, but of course the first episode is presenting the show and getting everybody familiar with the characters and their purpose. Then after that we’re going to get into the conflict and resolution. We have to establish who’s who the first episode.”

You are a ‘clean comedian’ who is popular. How do you do that?
“It’s easy. I just don’t curse a lot when I go on stage. Every now and then I’ll say a word if that word is part of the punch line, or if the joke is that word. But I don’t use those words just to use them. I just kind of keep it balanced. Most of my stuff is about church, so when  you’re talking about church there’s no reason to curse anyway because you’re talking about church and church folks.”

How do you get along with the cast members of ‘The Rickey Smiley Show’?
“The only one I don’t get along with is J. Anthony Brown because we have to keep doing takes because we can’t stop laughing at each other. So it’s hard to work with J. Anthony Brown because when he opens his mouth I’m going to laugh, or when I do my part he’s going to laugh. J. Anthony Brown is a problem because he makes me laugh and I make him laugh. We can’t get anything done with J. Anthony Brown and Noree Victoria, who makes me laugh. It’s hard to work with those two. They’re just naturally funny. I can’t look at Noree Victoria and not laugh. We laugh at each other. We’re real silly. Ray J is a lot of fun. Ray J is funny. His role is totally hilarious.”

Tune in to ‘The Rickey Smiley Show’ every Tuesday night at 9/8ET via TV One beginning September 18, 2012.

Photo: Rickey is photographed with the cast of the Rickey Smiley show.

DJIMON AND KIDS HANG OUT IN MALIBU

DJIMON AND KIDS HANG OUT IN MALIBU