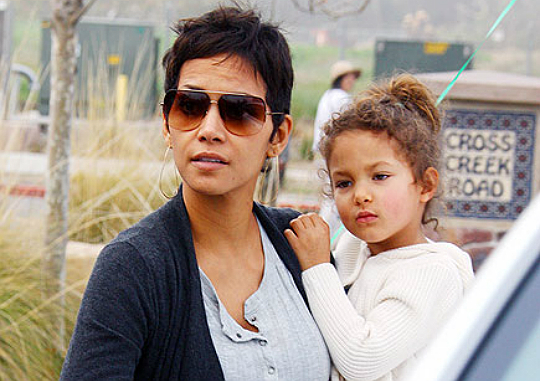 Halle Berry is serious about protecting her 4-year-old daughter Nahla, even to the point of talking with President Obama about the weak child protection laws that govern the country. “I have been struggling,” Halle says, “There are no laws here that protect our children and as a mom, coming to the school… not only my child, but all the children that are there. It’s just wrong, wrong, wrong.”

Halle recently confronted a member of the paparazzi after she discovered him trying to take pictures of Nahla at school. Amidst her anger and obscenities, Berry exclaimed, “I’m doing something honorable. I’m not harassing people!” When later questioned about the incident Halle said, “I hate that I lost my cool, but you know, I’m human. That happens and when it comes to my daughter — I’m ferocious.”

Berry previously contemplated moving to France with Nahla and fiance Oliver Martinez. Such plans are on hold at the present due to Halle’s custody battle with Nahla’s father Gabriel Aubry.

Click here to see Halle getting in a confrontation with the paparazzi.

CELEBS AND THEIR KIDS AT THE ATLANTA CELEBRITY KIDS FASHION SHOW

CELEBS AND THEIR KIDS AT THE ATLANTA CELEBRITY KIDS FASHION SHOW