TINA CAMPBELL BUMPS IT UP AT ALBUM RELEASE EVENT 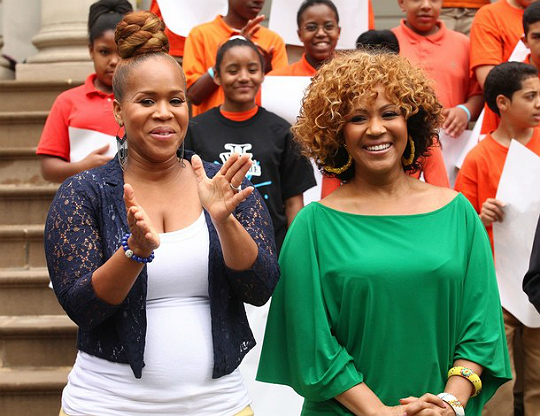 Mom-to-be Tina Campbell and Erica Campbell promote their new album ‘Go Get It’ at J&R Music and Computer World on May 8, 2012 in New York City.

Meanwhile, the gospel duo’s reality series Mary Mary has been renewed for a second season with a 10-episode order:

The series, starring Erica and Tina Campbell, sisters and musicians in the Grammy-winning Gospel duo Mary Mary, will begin filming Season 2 this month for a premiere in early 2013. The second season will follow the sisters through the birth of Tina’s [fourth] child, their latest album release – “Go Get It” – a family wedding, a cross-country album tour and countless appearances and events, all while balancing their busy, growing families. Mary Mary, produced by eOne, is delivering three times WE tv’s prime time female viewership average. (Source)

Check out more pictures of the pair below!