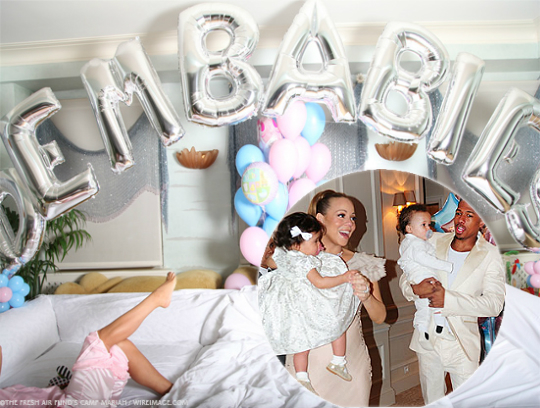 April 30, 2012 marked the first birthday of  Dem Babies a.k.a Moroccan and Monroe Cannon. The twins celebrated in style at the Plaza Athenee in Paris, France. Monroe and Moroccan were surrounded by loads of gifts and balloons that highlighted the festival. Both Mariah and Nick were present to commemorate the event.

Earlier that day, Mariah performed onstage in Austria as part of the “Top of the Mountain” concert series. She rocked the party in a skin-tight jumpsuit and, of course, told everyone about the one year anniversary of her babies’ birth. Mariah said, “Singing at this altitude is almost like giving birth to twins, which I did last year on this day.. lol! Happy birthday dem babies!!”

Proud father Nick Cannon also tweeted about his twins on their special day saying, “One of the happiest days of my life! Watching my wife on stage on our 4th anniversary & celebrating our kids 1st birthday! On a Jet home!”

Mariah and Nick renewed their wedding vows for the fourth time in Paris on Friday, April 27, 2012. The couple promised to love and cherish one another once again during an intimate ceremony at the Eiffel Tower. Nick and Mariah wedded in 2008. They welcomed Monroe and Moroccan into the world in 2011.