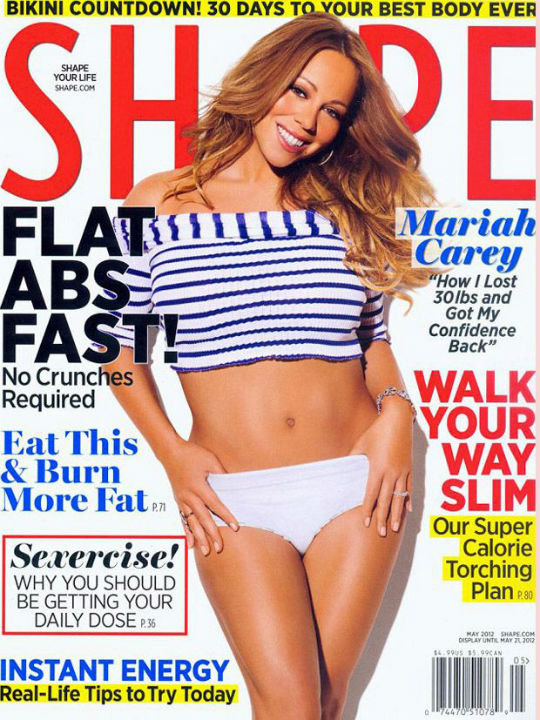 Mariah Carey has lost over 50 pounds since giving birth to twins Moroccan and Monroe last year. She recently covered the May 2012 edition of Shape magazine and talked about her weight loss experience.

When asked by the publication about her weight loss regimen, Mariah said, “I realize that 90 percent of losing weight is my diet. Today my workout routine is more about getting and staying toned. And for me, that means either taking hour-long walks a few times a week or jumping in the pool three or four days a week to do 45 minutes of aquatic exercises.”

She added, “Pregnancy was probably the best and the hardest thing I’ll ever go through. I know for a lot of women, it can be wonderful and relatively easy. But for me, it was like ‘Okay, honey, do you have to do everything the hard way?’”

In addition to talking about her weight loss, Carey talked about husband Nick Cannon’s health scare last year. Not only is Nick getting more sleep by tackling fewer gigs but he is also “eating a diet low in sodium and sugar.”

Nick Cannon recently spoke in promotion of America’s Got Talent. Although he is host of the show, Nick says that he would not want his children to endure what contestants go through. As he explains, “Absolutely not. That’s my personal feeling. If you asked my wife, she would say ‘yes! Let’s sign them up next year!’ The thing that is great about this show is that you’re giving people who would never have an opportunity at stardom an opportunity. As a parent, and maybe because I’m a new parent, I am so protective and so sensitive and would never want anyone to judge my child. [However if] you catch me in ten years and my child is an amazing singer or drummer and says, ‘Dad, I want to do it,’ of course I am going to support whatever they want.”

Monroe and Moroccan will be 1-years-old at the end of this month. They are the only two children that Nick and Mariah have together.

TINA CAMPBELL BUMPS AROUND THE GMA'S