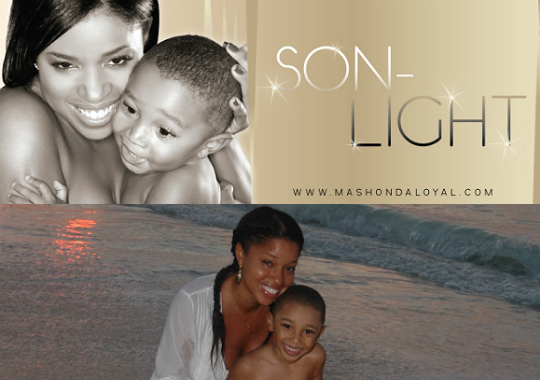 Mashonda Tifrere, a.k.a. Mashonda Loyal, is a mom on a mission. The singer recently tweeted a photo of her and son Kasseem Jr. at the beach and said, “God didn’t only give me a son, he gave me The Son-Light- A journal dedicated to parents raising boys. Coming soon[sic].”

PHOTOS: Mashonda has playdate with her son’s father, Swizz Beatz, and his new family

Sooner than later as it appears that Mashonda has already begun her quest to reach out to parents of boys by posting several blogs about her 5-year-old son on her website. In her latest post, Mashonda talks about Kasseem’s growth and her challenge as a mother to gradually let her little boy go. Tifrere  writes:

“As I pay close attention to Kasseem’s growth, I must admit that age five has transformed my sweet baby boy into a dynamic personality. Kasseem has always been a character but now he’s running for president! For the first time ever, I feel like that sad day is near when my son avoids my goodbye kiss in the morning because he doesn’t want his pre-K crew to see it. As I listen to him use more complex language to express his understanding of feelings, I’m totally blown away by his choice of words. Just the other day he said to me ‘Momma, that was so hilarious, I can’t stop laughing.’ In my mind I’m amazed that he didn’t simply say ‘Momma, that’s so funny.’ He’s also using his imagination and cognitive skills more to create his own self comfort (e.g., He goes into his room on his own and colors or plays legos instead of calling for me to play with him.)

He is also quite the problem solver, maybe this quality comes from his after-school chess program. The only downfall is that I can’t get much past him anymore, there is no fooling this kid! He has also become a great strategist, I can look at him and see that he’s now asking me questions then weighing his options.

My goodness, can’t wait to see what’s next.”

Kaseem Jr. is Mashonda and Kaseem Dean’s, a.k.a. Swizz Beatz, only child together.

DADDY AND ME: CORY AND CREE KEEP IT COOL IN SHADES

DADDY AND ME: CORY AND CREE KEEP IT COOL IN SHADES