NICK ‘MAN OF THE YEAR’ CANNON WAS BUILT FOR FATHERHOOD 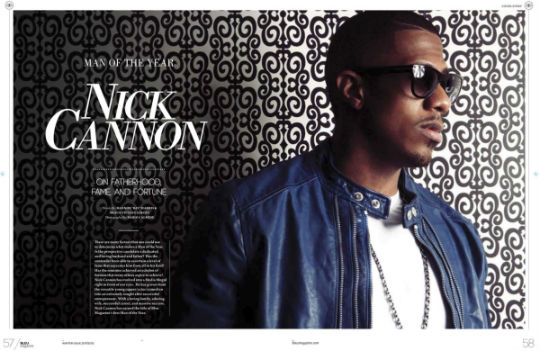 Nick Cannon has been selected as Bleu magazine’s man of the year. In an interview with the media source Cannon said that he was made to be a father. Nick states, “I was built for fatherhood.  I grew up in a family with a lot of kids. I have taken care of kids my whole life.  As soon as my children were born, they became first and everything else became secondary.”

Although many did not believe that his marriage to Mariah Carey would last, Nick has attributed their relationship success to romance. As Cannon explains, “Mariah and I are both hopeless romantics.  We just made a pact to say that we want to be in this because we enjoy each other and we love each other. We want to be successful at being in a relationship; we want to have a good time.”

Mariah and Nick are parents to 9-month-old twins Moroccan and Monroe. The couple wedded on April 30, 2008.