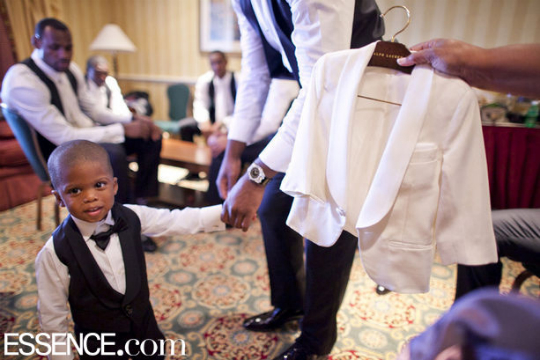 NBA player Chris Paul married his longtime girlfriend Jada Crawley in a lavish affair this past September in Charlotte, North Carolina. For the bride and groom, one of the best parts of the wedding was that their son Chris II,2, a.k.a Lil Chris was there to witness the momentous event.

“People can say, ‘They had a baby out of wedlock,’ ” says Jada. “But when I got pregnant, Chris’ clubbing came to a halt because he wanted to be a good father. And being a good father meant being a better boyfriend.”

Chris adds, “Becoming parents made us closer.” “Everyone knows I love kids. So now to actually have my own son? There’s nothing like it!”

But don’t be mistaken: the couple married not only for their son, but also for true love.  “I truly love Jada; she has been there for the ups and the downs. Basketball isn’t going to last forever. Jada and I love spending time with each other, genuinely,” reveals Chris.

More pictures below! and at even more at Essence.com