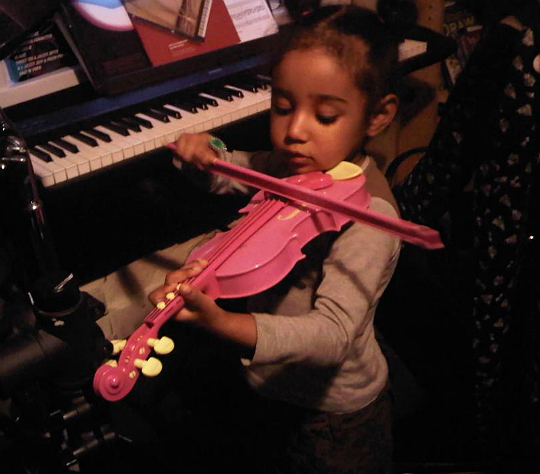 Now this is music to our ears! Producer Swizz Beatz has reached an official child-support deal with the mother of his 3-year-old daughter Nicole, sources report:

The settlement comes after a prolonged back-and-forth between NY-based lawyers for Andrianova and Beatz, who has four children by four women. Attorney for Beatz Robert Anthony Evans Jr. told us that he supports each of his children, adding, “Mr. Dean has never failed to deliver on his responsibility to his children. Sources tell us Beatz has been paying interim child support for his daughter with Andrianova, and the official settlement was delayed due to her being unable to travel to the US for court appearances, and her refusal to accept a settlement he offered a year ago.

Another source tells website MsTrendy, “Swizz is a great father and is taking care of his children. He didn’t know about Nicole until she was 1 year and 2 months when the lawyer sent him a letter as it was the only way of contacting him, because there was no contact for two years. Jahna made sure that the birth of Nicole did not have any negative impact on Swizz’s marriage to Mashonda and when everybody found out about her in July 2009 they (Swizz and Mashonda) were already in the process of divorce for other reasons and were living separately.”

UPCOMING: ZARIA ZAKIYA IS A VIOLINIST AND MORE

UPCOMING: ZARIA ZAKIYA IS A VIOLINIST AND MORE