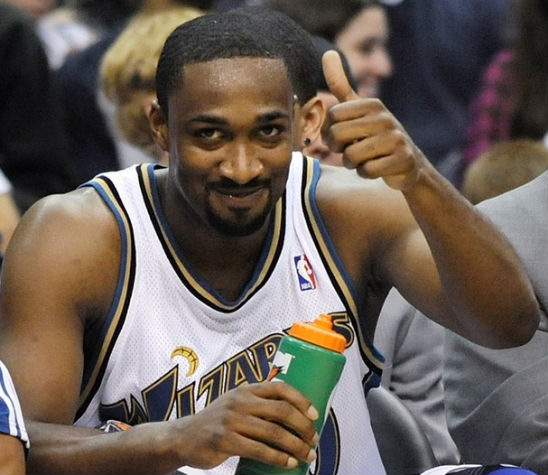 NBA player Gilbert Arenas has allegedly cut off communication and funds from his wife Laura Govan and their three children, reports the Washington Post:

Click here for a picture of a four-months pregnant Laura.

Govan, who is four months pregnant with their fourth child, “has not heard from Arenas the whole month of December,” said publicist Laura Wright in an e-mailed statement. “Govan and the children feel like they have been abandoned.”

Wright – who has worked for Govan’s sister Gloria and her fiance, Los Angeles Lakers forward Matt Barnes – said that Govan was left at their Great Falls home “with no money to purchase food or Christmas gifts.”

A representative for the Orlando Magic, playing in Cleveland on Tuesday night, said they had not been able to reach Arenas for comment by press time.

The breakup happened around Thanksgiving. Though he didn’t reveal a relationship rift at the time, Arenas recently told reporters he had been staying with Wizards teammate Nick Young for about a month.Read More

ANTHONY ANDERSON AND SON GIVE THE GIFT OF JOY

SUGAR RAY AND FAMILY POSE FOR THE CAMERAS

SUGAR RAY AND FAMILY POSE FOR THE CAMERAS