RUSSELL SIMMONS IS A PROUD FATHER 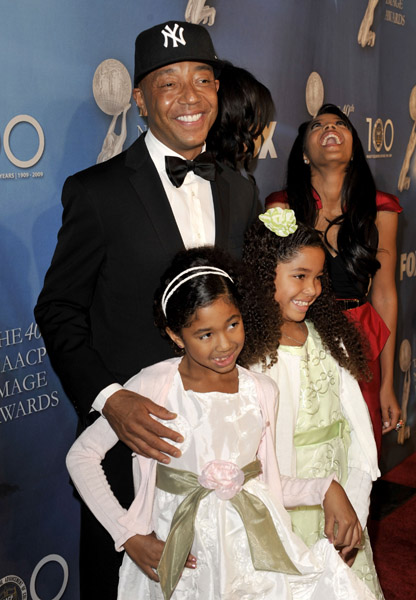 One thing is for sure: Hip-Hop mogul Russell Simmons is a proud father. In addition to being a proud father, Russell can’t stop praising his ex-wife Kimora Lee Simmons, with whom he has daughters Ming,9, and Aoki,6. As to how he manages to stay amicable with his ex wife, Russell says,“You smile no matter what happens, and you keep smiling. During a marriage, they say you make a tremendous compromise. Men say all the time they just be quiet. You’ve gotta be quiet 24 hours. It’s OK if you’re separate and can be quiet, but it’s a mess if you talk. You just learn to be a little bit accepting and promote tolerance and act and be tolerant yourself. Allow each other a little freedom, and faith.”

On his daughter Ming Lee, who is learning to speak French and Italian: “She loves yoga, she loves piano, she’s a very cultured girl. She went to Africa and Paris with her mother. She’s learned a lot about a lot to be so young.”

On what he loves about being a dad: “The innocence is inspiring. The way young people think, you want to think like them so they teach you a lot. Having a child teaches you so much. That really is the best part of being a dad. You remember what’s important in life.”

CHEF WOLFGANG AND HIS GANG

BILL BELLAMY AND FAMILY ARE ALL SMILES

BILL BELLAMY AND FAMILY ARE ALL SMILES