Home » NEWS » MELANIE BROWN: “MY KIDS ARE LOVED-BUT NOT SPOILED”

MELANIE BROWN: “MY KIDS ARE LOVED-BUT NOT SPOILED” 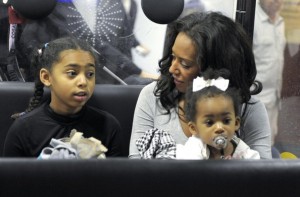 Singer Melanie Brown is keen on raising her kids to become responsible adults. The singer who has two children, Phoenix, 10, (dad is dancer Jimmy Gulzar) and Angel,2 , (dad is actor Eddie Murphy), says that she limits the amount of money she gives her kids.

She tells Closer magazine,  “My kids are loved – but not spoiled. They won’t end up being Hollywood children, down the shops using mum’s credit card. I’ve just got Phoenix her first pay-as-you-go (cell) phone, so if she does her chores and is good, she gets pocket money, so she can afford to top it up.”

It’s not only Phoenix who has “chores to do”.  Little Angel Iris “tidies up after herself.”  Mel says she gives her children chores because she wants them to learn responsibility early.

But  Brown admits that one day, her older daughter may rebel.  She says, “I’m sure I’m going to get some kind of payback when Phoenix turns into a teenager. If she’s anything like I was, then I’ll be in for quite a ride – I was a big handful.”