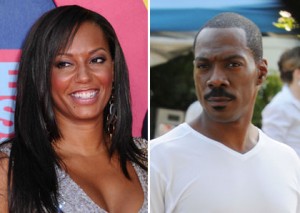 Actor Eddie Murphy has been ordered to pay $51,700 per month to former Spice Girl Melanie Brow for their daughter Angel Iris Murphy Brown.

Via ClevelanLeader:Murphy has been ordered to pay approximately $51,700 per month until their daughter reaches 18 years old. She is now 22 months old, so that would total about $10.3 million USD. He also also finally agreed to see his daughter, who he had originally questioned was his until a DNA test proved he was in fact the father

Murphy and Brown have spend the past 15 months fighting in the Los Angeles courts. Both have signed non-disclosure contracts which prevents them from discussing the settlements in public.

Mel B has a nine-year-old daughter, Phoenix Chi, from her first marriage to dance Jimmy Gulzar. Murphy has five other children with his ex-wife Nicole Mitchell.

A PREGNANT PAUSE WITH KIMORA, DJIMON, AND RUSSELL AT PRE-GRAMMY CEREMONY

A PREGNANT PAUSE WITH KIMORA, DJIMON, AND RUSSELL AT PRE-GRAMMY CEREMONY