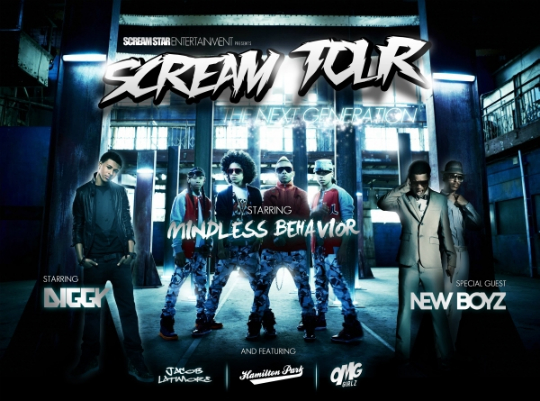 The next generation of superstars are heading out on tour starting this September:

In the spirit of continuing the rich tradition and legacy created 10 years ago, along with giving young people everywhere something they could personally call their own, the Scream Tour is returning and getting back to the premise that made it such a powerful and formidable force in 2001—exposing and introducing the next generation of artists to the masses and creating a platform for them to display their talents. With that being said, this year’s Scream Tour aptly titled—Scream Tour: The Next Generation (NXG) brings the Scream Tour brand back to its roots and introduces fans to an entirely new crop of young stars. This year’s Scream Tour: NXG stars musical phenoms and Conjunction/Streamline/Interscope recording artist Mindless Behavior & Atlantic Records’ recording artist Diggy, son of hip-hop icon Rev Run of RUN DMC fame, with special guest Shotty/Warner Bros. Records artist The New Boyz. It will also feature JIVE recording artist, Jacob Latimore & Atlantic Records’ new R&B quartet Hamilton Park and introduce to the world the winners of the 2010-2011 “R U The Next Scream Star?” Nationwide Contest–The OMG Girlz. (Source)

Head to ScreamTour.com for information on tour dates!