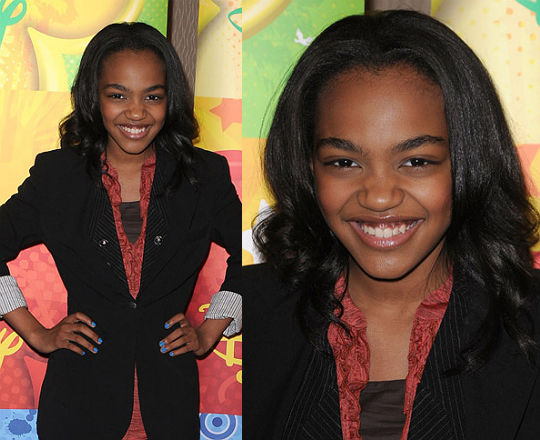 Actress China Anne McClain poses at the Disney ABC Television Group May Press Junket at ABC Studios on May 14, 2011 in Burbank, California.

China is the newest star of Disney’s upcoming original series “A.N.T. Farm,” which premieres in June:

Disney encountered Ms. McClain in all of her bubbly glory about five years ago. She auditioned for a TV movie called “Jump In,” about a boy who discovers a hidden passion for jumping rope. She won the role but turned it down because she had a better offer: Tyler Perry, the Atlanta movie and television mogul, wanted to cast her in his TBS series, “Tyler Perry’s House of Payne,” and a film, “Daddy’s Little Girls.”

But Disney didn’t give up, and before long Ms. McClain was on the company’s child star assembly line: making guest appearances on shows like “Hannah Montana,” taking lessons on how to interact with the news media, popping up in a Web video here and there. Meanwhile, Disney toiled to build a show entirely around her.

SWIZZ BEATZ AND HIS SOCCER PALS

SWIZZ BEATZ AND HIS SOCCER PALS