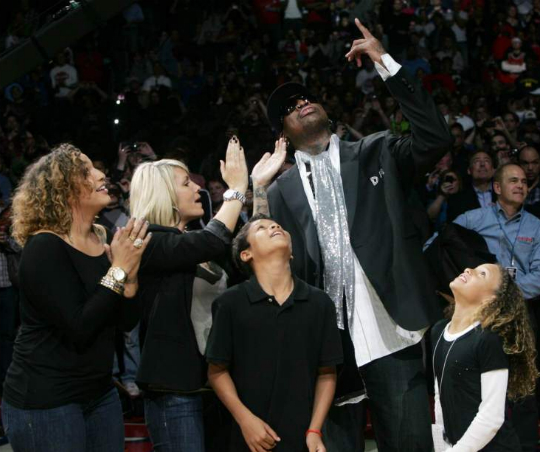 Former Detroit Piston player Dennis Rodman shared a proud moment with his daughter Trinity and his son Dennis Rodman Jr. during the  retirement ceremony of his number 10 jersey at the Detroit Pistons vs Chicago Bulls basketball game earlier this month:

Rodman and his wife, Michelle, stood by as their 10-year-old son and nine-year-old daughter unveiled the banner that simply read “Dennis Rodman 10.” The four proudly beamed as it slowly found its way to its permanent home in the Palace rafters.

But the biggest thrill for Rodman was sharing this moment with his young son, Dennis Jr. (D.J.) and young daughter, Trinity. They had never seen any tapes of their father’s basketball career in [Detroit].

“It’s going to be the first time they’re going to see a video of their father doing something positive in life,” Rodman said, only half-joking. (Source)