Home » NEWS » AT HOME WITH TYSON AND HIS FAMILY

AT HOME WITH TYSON AND HIS FAMILY 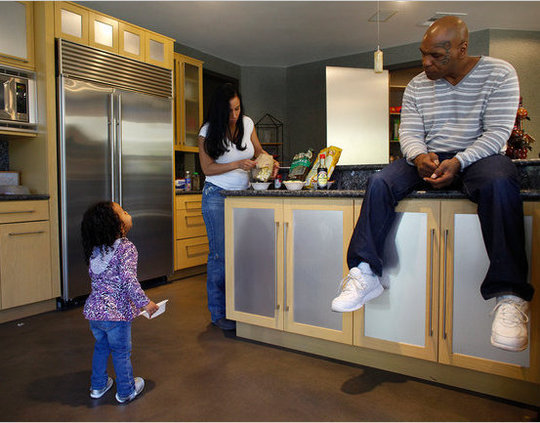 Mike Tyson sits quietly in his kitchen with his wife Kiki and their two-year-old daughter Milan. Somewhere in Tyson’s new suburban home is the couple’s  newborn son Morocco:

The gold caps on his teeth are gone, as are the frenzied trappings of celebrity: the nonstop partying, the cars, the jewelry, the pet tiger, the liters of Cristal. Mike Tyson — who was once addicted, by his own account, “to everything” — now lives in what might be described as a controlled environment of his own making, a clean, well-lighted but very clearly demarcated place. The 44-year-old ex-heavyweight champion is in bed by 8 and often up as early as 2 in the morning, at which point he takes a solitary walk around the gated compound in the Las Vegas suburb where he lives while listening to R&B on his iPod. Tyson then occupies himself with reading (he’s an avid student of history, philosophy and psychology), watching karate movies or taking care of his homing pigeons, who live in a coop in the garage, until 6, when his wife, Lakiha (known as Kiki), gets up. The two of them go to a spa nearby where they work out and often get a massage before settling into the daily routine of caring for a 2-year-old daughter, Milan, and a newborn son, Morocco; they also run Tyrannic, a production company they own. It is a willfully low-key life, one in which Tyson’s wilder impulses are held in check by his inner solid citizen.

…He spends some of his time involved in domestic activities, accompanying Kiki and Milan to classes at Gymboree and doctors’ appointments or running errands, and some of his time furthering his post-boxing career, doing autograph signings, conferring with his agent and publicist about new opportunities. Although he no longer gets lucrative endorsement deals, Tyson earns fees for personal appearances in America and “meet and greet” dinner tours in Europe. He made a brief but memorable cameo in the blockbuster film “The Hangover” and will play a bit part in “The Hangover Part II.” He’s hoping to nab more acting roles — genuine ones, in which he gets to play someone other than himself. “I want to entertain people,” he tells me, smiling broadly. “I want a Tony award.” (Read More)

In all, Tyson has six biological children, who range from newborn to 20 years of age. Tyson’s seventh child, a daughter named Exodus, died from a freak accident at age 4 in May 2009. To this day, Tyson blames himself for not being there when his daughter died. “It made me feel very irresponsible,” he says simply. “I wish she were here to hang out with Milan.”

Read more of this article at New York Times.com