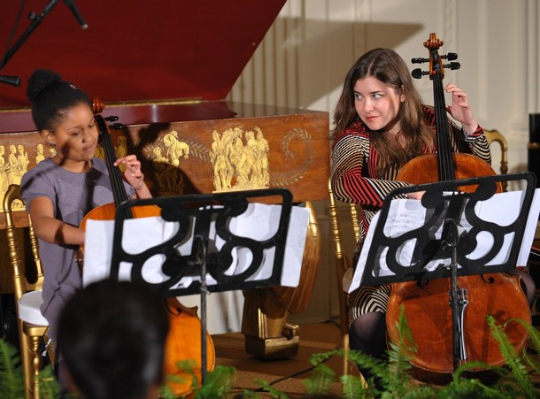 In 2009, Sujari Britt(L) was asked by First Lady Michelle Obama to play at the White House alongside renowned cellist Alisa Weilerstein(R).  Since then, the nine-year-old child prodigy has received countless accolades, including being named the 2010 recipient of the Dianne Flagello Precollege Division Scholarship Endowment at the Manhattan School of Music where she studies.

Britt, who has been studying the cello at least three hours a day since the age of 5, wowed first lady Michelle Obama in November 2009 at a White-House-hosted workshop and recital for student musicians. The first lady summoned the youngster to perform for the president that evening, where Britt captivated the White House audience with her precision as she performed the first movement of Luigi Boccherini’s Sonata for Two Cellos in C Major with 27-year-old Alisa Weilerstein.

Even before her White House performance, it was already abundantly clear that this cello prodigy would make an impact on the classical music world; in 2008, her performance of Bach’s Cello Suite No. 1 in G Major won first place at the annual Associated Music Teachers League scholarship competition. Read More