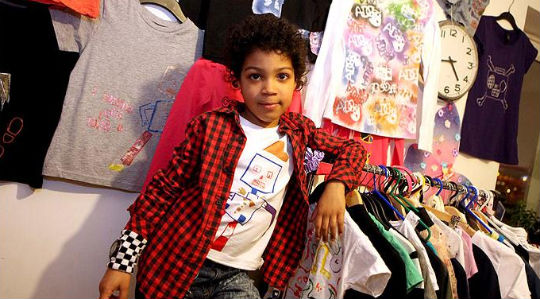 Alexander Daniel Patterson is taking the fashion industry by storm.  At the age of six, the pint-size designer already has his own line of t-shirts, hoodie,  and tote bags and in January 2011, he will be opening his online shop.

Alexander, who lives in the UK, started putting his drawings on to t-shirts at the age of three, but his passion for fashion started at the age of two.

His mom Chelsea explains, “When he was two he said to me, ‘I want to have a business’ and I didn’t think much of it at first. But he was so keen that I thought I would support him.”

Last month, Alex held a charity fashion show to  raise money for children in need. Check out a footage of the show at his Blog

PHOTOS: CATCHING UP WITH CASSIUS BROWN