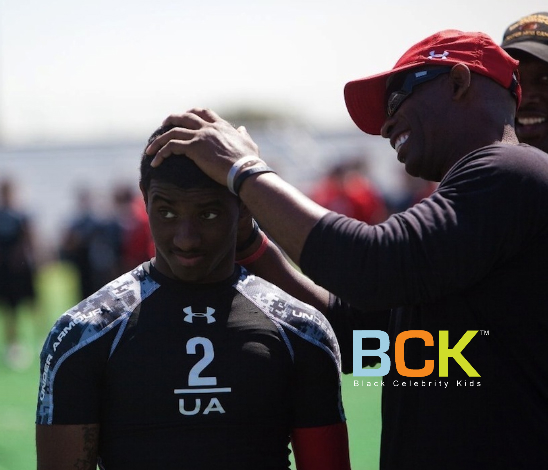 16-year old Deion Sanders Jr. is more like his father than not. Check out Rivals.com’s featured piece on the young athlete to find out how similar he is to his dad, NFL legend Deion Sanders:

And the facial resemblance – with a smile that can light up a room – is there. As is the quickness and the sinewy but deceptively strong body.

But Flower Mound (Texas) Marcus football coach Bryan Erwin really saw how much Deion Sanders Jr. was like his famous father on a broken play during a spring scrimmage vs. Irving (Texas) High.

It was a play-action pass play. Sanders – new to the quarterback position – felt pressure from the backside as he set to throw. So he reversed field, breaking one tackle and outrunning everyone else en route to a 25-yard gain.

“That’s just the type of athleticism that he has,” Erwin said. “If he doesn’t like what he sees, he’s going to take off, and we give him freedom to do that. He’s got the green light, and that’s where he’s at his best.” Read More