Home » NEWS » OBAMA DISCUSSES ‘ROSES’ AND ‘THORNS’ ON THE VIEW

OBAMA DISCUSSES ‘ROSES’ AND ‘THORNS’ ON THE VIEW 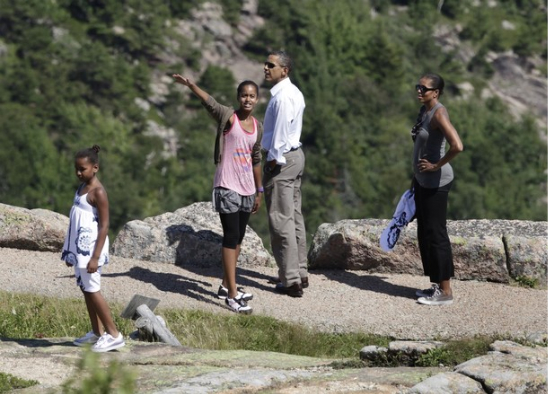 It was only a few days of vacation time, but according to President Obama, his family trip to Maine was the highlight of his month.

He says in an interview with ABC’s The View, “Well in the last month the rose has to be a couple of days we took in Maine with Michelle and Sasha and Malia, and we went on bike rides and hikes, and the girls are getting old enough now where they’re not quite teenagers yet, so they still like you, but they are full of opinions and ideas and observations, and it’s just a great age. Malia just turned 12 and Sasha just turned nine, and it couldn’t have been a better couple of days.”

As the saying goes, “Every rose has its thorns.” For the president, there have been many thorns in his presidency in the past few weeks.

“Obviously the country has gone through a tough stretch since I took office. When I was sworn in, I know you showed the Inauguration, we were losing at that time 750,000 jobs per month, the economy was shrinking at a pace of about 6.5%, which is unheard of since the Great Depression, and so the last 20 months has been a non-stop effort to restart the economy, to stabilize the financial system, to make sure that we’re creating jobs again instead of losing them, and in the midst of all that we’ve also had the oil spill, we’ve also had two wars, we’ve also had a pandemic, H1N1, that we had to manage, and a whole host of other issues. What has been gratifying is the fact that the economy now is starting to stabilize and grow again, and what’s been satisfying is seeing how resilient the American people are. As much as you said it’s been tough for me, the truth is, it’s not tough for me; you know I’ve got people, pundits on the news who may say things about me.”