Home » NEWS » GET THE SCOOP ON WILLOW’S STYLE + IS THERE A FASHION LINE IN THE WORKS?

GET THE SCOOP ON WILLOW’S STYLE + IS THERE A FASHION LINE IN THE WORKS?

by Mama Guru
in NEWS, STYLE, YOUNG STARS
0
1
VIEWS
Share on FacebookShare on TwitterShare on LinkedinShare on Whatsapp 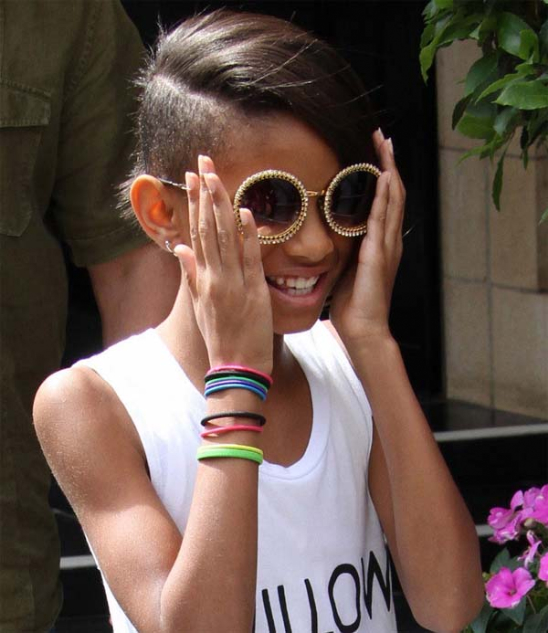 “She’s a rock star, through and through. She likes everything to have that kind of rock ‘n’ roll feel to it. Instead of ballerina flats, for instance, she’ll wear motorcycle boots,” says stylist Mariel Haenn of child star Willow Smith’s style.

“Willow is definitely inspired by Rihanna’s style,” Mariel adds. “We make an effort to give Willow her own style, so as not to be a mini-version of Rihanna, but Willow really knows what she likes and what she doesn’t like, and she’s vocal about it.”

But Willow’s mom Jada Pinkett-Smith has final say as to what Willow or her brother Jaden wears. “Jada said upfront that she didn’t want us to dress them like standard kids, like with Sesame Street T-shirts,” Mariel says with a laugh. “And the kids really like dressing as adults and hope that adults will want to dress like them. But Jada will put her foot down if there’s something she doesn’t like, though if the kids really love it, she’ll usually let it pass.”

According to Mariel, most of Willow’s clothing are custom-made. But not to worry! Willow and Jaden may soon have their own clothing lines.

“With Rihanna, pretty soon after she came on the scene, you started seeing designers from Forever 21 to Gucci coming out with styles mimicking her look. We hope the same thing happens here, but I think the ultimate goal is for Willow and Jaden to have their own line,” says Mariel.