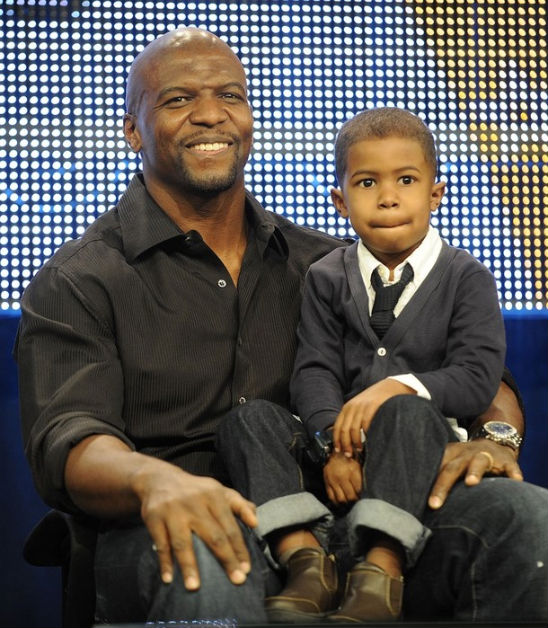 With five kids to feed, it comes as no surprise that actor Terry Crews would do just about “anything for money”-including starring in new family show Are We There Yet.

“Basically I did it for the money. [Laughs.] You can put that down, in quotes. The money’s really good on this. It’s funny because it’s a family show, a family movie, and I was really afraid of taking over somebody’s character—you know with Ice Cube and the whole thing—because you don’t want to mess it up for anybody. Ice Cube, Terry Crews, we don’t even look alike. [Laughs.] But when I got the call from Cube, he was like, “Man, coming off Everybody Hates Chris I think you’d be the perfect guy to handle this, TV-wise.” And I was like, “Great, so how’s the money?” [Laughs.] And he was like, “We’re going to hook you up.”

He continues, “All of a sudden the scripts got better, everything got lovelier, and the sun shined a little brighter. So, we got this whole thing going, and it took a long time to happen because they’re doing it Tyler Perry style, where you basically are aiming to do a hundred episodes. There’s no cancellations. It’s all good. TBS bought the first 10, now we’ve got to see where we’re going to get the whole 90 out of, based on how it does. I couldn’t turn it down, I just thought it’s really great, and the money is good, again. [Laughs.] That’s pretty much how that worked out. It’s a great show. I have five kids so the big thing is: It’s either Disney Channel or Two And A Half Men, Big Bang Theory, sitcoms where it’s all adult. I think this fits right in the middle. It’s not too adult for the kids, and it’s not too kiddie for the adults. It fits right in that underserved market, so I can sit and watch it with everybody.”

As for whether or not he minded cameras following him everywhere on his reality show The Family Crews, he says,  “I don’t, because I am the same guy. I think if I had a Tiger Woods lifestyle, I might have a problem with cameras. I knew that something wasn’t gonna come out of the woodwork. That’s really the issue: Can you put yourself out there and still be the same guy? I am what I am. Finally, after convincing my wife, and paying her very well… [Laughs.] It’s all about the money! My son wants to renegotiate for season two. He’s 4-years-old and he’s like, “Dad, it’s not working out.” With that kind of thing happening, we just see how it can provide other opportunities, too. I got to executive produce this and I’ve been producing other reality shows that hopefully will be out next year, and I want to make that move into the producing thing. I figure if I’m gonna ask somebody else to put their life on camera, I’ve gotta do it myself.”

UPCOMING: BROOKLYN IS A YOUNG AUTHOR