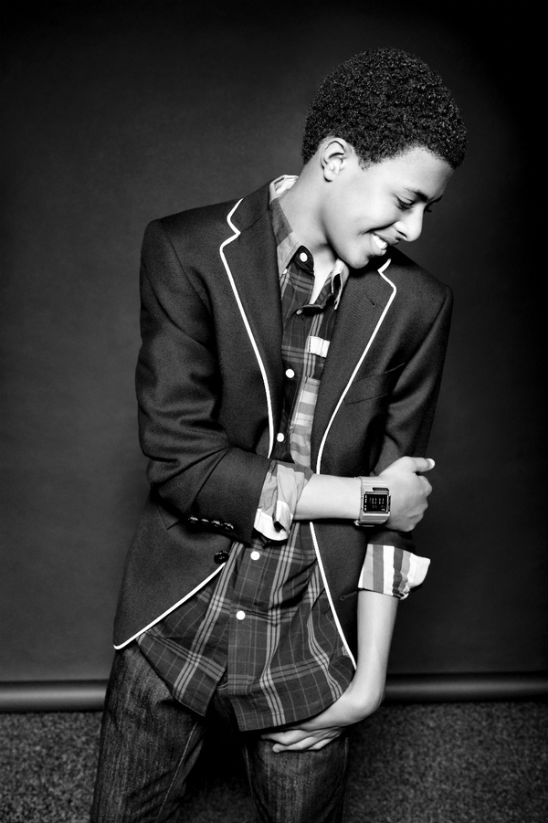 15-year-old Daniel Dwayne “Diggy” Simmons III appears to have it all: a music career, an upcoming sneaker line, “Chivalrous Culture”, a famous reality show, Run’s House, and much more. So what else is left for this young man? Perhaps college? Find out the answer to that question  in a new interview conducted by TeenMusic(below):

Diggy on having a “Point to Prove”: “One, is proving that I am here to stay past the first album or single. The second point is for those people that don’t give me a chance. They think I will be whack because of “Run’s House,” and where I come from. They think I get my rhymes written for me. So I have to prove them wrong and let them know I am doing it on my own and coming with raw material. I want to be the best in every element that I do from fashion to music to it all. When people think of hip-hop I want my name to be up there with people of Jay-Z’s caliber. So me starting young is learning what to do.”

He wants young people to know...” I want to show young people that starting out now is not bad. It gives you the step up when you get older. It takes hard wok and dedication but ambition is good. You have to take that first step to where you want to be.”

On how he defines success… ” I have a song called “What’s it All For,” and we were talking about these how these dudes don’t do it for the love anymore. So it’s asking is it for love or passion? In my rhyme I said something around the lines of setting your own success and it’s your definition. It’s not a bunch of awards or money. If you feel like success is having a steady job, picket fence, dog and two kids then that’s okay. For myself I think as I get older I can see a more vivid picture of success”

On how Run’s house almost put at end to his social life: “There would be girls I would talk to or go with and they’d get mad that I had to do the show. If I got into anything with a girl I had to make sure they were cool with the show first. Plus my parents would trip up a little bit with me doing some normal stuff like hanging out but they don’t trip as much now. So that’s the curse of having the show and then of course there’s the gift.”

On puberty and his voice change.. “It’s something that happens and people do notice it. People have said that my voice changed since the first mixtape. I’ve seen comments where they don’t think it’s my voice. It’s funny because people don’t expect me to grow up. They say that I act different than I was on “Run’s House,” but they don’t see that this is the stage of my life where I am becoming a young man.”

On his fashion style: “I stick to basics for the fact that you can make a statement with a little color in a handkerchief, tie or shoes. It’s usually more simple earth tones that I use but I always have that pop color to bring the whole thing together.”

On whether or not he plans to go to college: “It is great but there are way too many things going on now. I don’t know I might be on the road by that time. I encourage college for every young person but personally for me I’m not sure yet. That’s not because I don’t want to go. I just don’t know where I’ll be. Only time will tell.”

PROMO MANIA: JADEN SMITH AND DAD AT A SPECIAL SCREENING IN CHICAGO