SIOHVAUGHN WADE: DWYANE’S GIRLFRIEND IS STRESSING OUT OUR KIDS 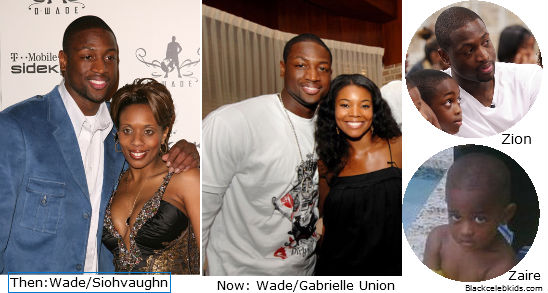 Things are heating up in the divorce proceedings between Miami Heat player Dwyane Wade and his estranged wife Siohvaughn Wade. Siovaughn claims that the NBA player’s relationship with his girlfriend, actress Gabrielle Union, is causing her two children Zion,8, and Zaire,2, emotional distress.

Siohvaughn Wade claims actress Gabrielle Union “engaged in sexual foreplay” in front of Wade’s 8-year-old and 2-year-old sons while on a visit to the basketball star’s Miami home, according to a suit filed Tuesday in Cook County Circuit Court.

The older child has sought medical treatment for stress and anxiety, has developed nervous habits, headaches, and “significant” hair loss causing bald spots, according to the suit. The boy is currently seeking court-mandated mental evaluations at the University of Chicago, the suit said.

The suit also claims Wade’s oldest son was allowed to play in a pool unsupervised at the basketball star’s Miami home.

Representatives for Wade and Union could not be reached for comment(Source).

HEIDI SKIPS TO HER LOU AND THEN TO A FANCY RIDE