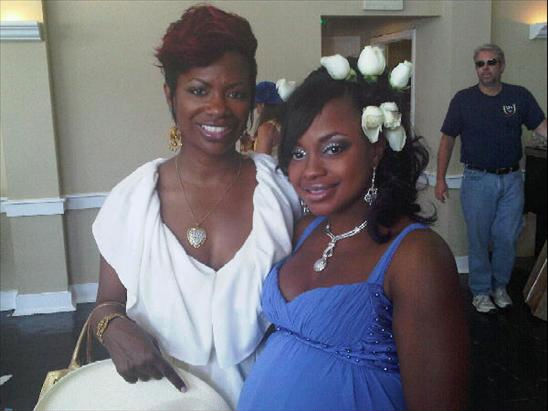 Celebrity Attorney Phaedra Parks was all smiles at her baby shower held this past weekend. Phaedra, who is the newest member of reality show  “The Real Housewives of Atlanta”, is due to give birth this July.

Details of Phaedra’s baby shower below, courtesy of Access Atlanta:

We hear the fete, was held at the Park Tavern, which was festively decorated in blue and white (Parks and her husband are expecting a boy).

Parks “looked like a goddess,” one attendee told us, and indeed a photo posted from the event shows a radiant Parks in a glamorous, deep blue dress with white flowers in her hair.

The Bravo cameras were rolling, of course, so look for the celebration on an upcoming episode. Because the event was held on Sunday, the weekend of the Kentucky Derby, guests were encouraged to arrive in hats. Almost everyone did.

“Kim (Zolciak) got there late, and wasn’t wearing a hat,” our source told us. But, the leggy blonde, a mom of two, apparently dispensed helpful parenting advice.

Other cast members, including Lisa Wu Hartwell, attended. NeNe Leakes did not. Stylist Dwight Eubanks hosted the shower, after all, and he and Leakes haven’t exactly been getting along lately(Source).

SIOHVAUGHN WADE: DWYANE'S GIRLFRIEND IS STRESSING OUT OUR KIDS