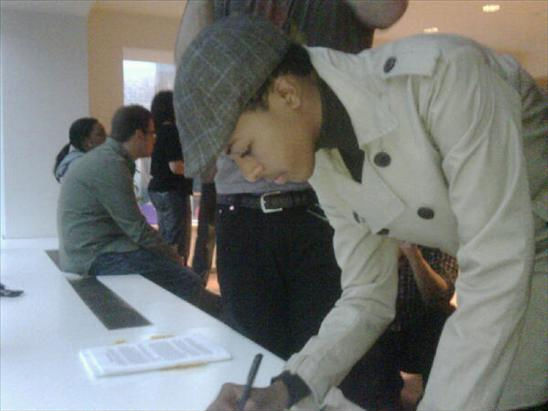 Congratulations are in order for celebrity kid Diggy Simmons. The fifteen year-old(he just celebrated his birthday on March 21st) has signed to Atlantic records. Diggy is officially a certified rapper/artist!

With his mixtape (The First Flight) and countless other singles/remixes (Star Is Born, Point to Prove, Set Me Free) being recognized by fans, yet overlooked by major media outlets, it took the release of his remix to Drake’s, “Over” (Just The Beginning), that eventually got Daniel “Diggy” Simmons love shown by said outlets for being “the first” to drop something over the newly then released track. Although people were receptive of his remake of the new single, Diggy still had more hearts and ears to capture and win over, with the goal of letting everyone know that him creating music was not a hobby but a passion and it was something he is great at.

Going back into the studio, the young fashion icon spit a crazy sixteen over Nas’ “Made You Look”, and unleashed “Flow Stoopid” . Linking up with PhilTheGod to create a visual along with the track, Flow Stoopid, was the hit that finally got Diggy more love then anticipated. With cosigns by Lupe Fiasco and Swizz Beatz via twitter and blog postings by Kanye West and Common, Diggy EARNED his buzz that has major companies, labels and the internet wanting to get familiar with him

Last week the buzz generated rumors that Atlantic Records signed Diggy Simmons, a small statement of denial was released due to at that time it not being true but as of Monday, March 22, 2010, the day after Diggy’s 15th birthday, the deal has been sealed; Atlantic Records has signed Daniel “Diggy” Simmons!!.(Source).

MISA AND HER CLAN BLACKOUT