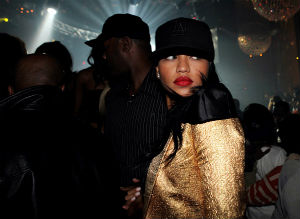 *President Barack Obama and his daughters 8-year-old Sasha and 11-year-old Malia spent about an hour and a half shooting hoops with their father last week Sunday. A few days later on Tuesday, Sasha and Malia met up with NBA player Kobe Bryant and his family. Yes, Malia, Sasha, Natalia, and Gianna all hung out together!

“It was great,” Bryant said of the family get-together. “He spent a great deal of time talking to my kids. We talked about the season and how it’s progressing. It was good just to have that time. Just catching up, because I had never met him before.”

*Singer Cassie is not pregnant, contrary to rumors alleging that she is with child. She said via her twitter page ,”Come on People! I still have on weight from the holiday…not preggers kiddies!”

*Actress Tisha Campbell-Martin’s sister Tiara gave birth to a baby girl on Sunday night (Jan 24), four months(this is what the source reported) earlier than was expected. According to sources, stress caused Tia to deliver early. Tia is upset that the alleged father of her baby, singer Diamond blue, refuses to accept that he is the father. Read more of this story here. [Did someone say, Maury?]

* According to sources, Michael Jackson’s eldest kids Prince Michael,12, and Paris,11, are scheduled to appear at the Grammy Awards show this weekend to accept a Lifetime Achievement Award for their father. These rumors have yet to  be confirmed.

*It’s a case of he said and she said. She claims that he beat her while she was nine months pregnant with his child, but he denies such accusations. NFL player Steven Jackson denies ever beating his ex-girlfriend Supriya Harris. The Louis Rams running back says it “would be out of character” for him to beat up on a pregnant woman. Steve says, It’s disheartening that I have to address any alleged allegations 10 months later, but I have read the accusations made by Supriya Harris, and they are untrue.”

Supriya meanwhile maintains that Steve mishandled her when she was pregnant and said in a complaint, “Steven became enraged and pushed me to the ground, repeatedly.” Harris also claims Jackson, “forcibly grabbed my arm and flung me against the door. I was crying and trying to protect my stomach from the blows, as I was 9 mos pregnant.”Click here to read more. [Drama!]

HOT TOPIC: WAS JUSTIN COMBS' BIRTHDAY BASH TOO OVER THE TOP?

HOT TOPIC: WAS JUSTIN COMBS' BIRTHDAY BASH TOO OVER THE TOP?