READERS REACT: IS 18 TOO YOUNG? 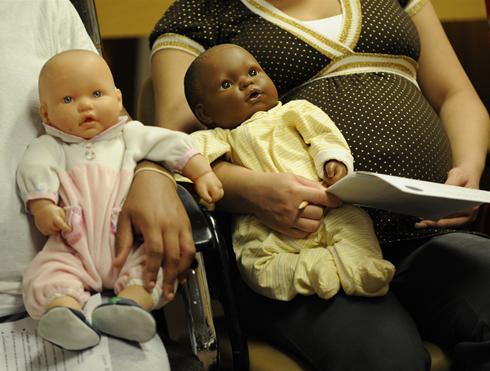 Torre said: “Wow…. too bad she couldn’t wait a while, spend a few years with her boyfriend in an adult-relationship… as opposed to a teenager-relationship, get her modeling career secured, grow-up some, and then marry and start a family. What’s the rush young ladies?!?  I know it’s their lives, and I wish them much success and happiness.”

Ms Ashley said:   “Babies having babies…too young to be a mother???? Children are a gift from God!!!! I take it as such!!!! I have three and I’m going on 26. I agree I could have waited, however, if I had to do it all over again I would!!! I have a full-time job….going to school….hey it can be done. I’m a living witness!! You do have to grow up fast and yeah there are times I wish things were different but I have a great family….a great man (and I’m not married) but that helps!! I feel like its all about the person. I’m sure she’ll make it…Anyways congrats Jourdan!!!!”

-Every year around 750,000 teenagers will get pregnant.

-Unmarried teenagers having children account for 24 percent of all unmarried expectant mothers.

-More than 2/3 of all teenagers who have a baby will not graduate from high school.

-The federal data — largely from birth certificates — shows widespread statistically significant increases [ in birth rates for teens] for 2006, the most recent year for which data are available.

– In 2006, about 1 million teens and young adults had chlamydia, gonorrhea or syphilis. And the rates of syphilis, for men and women, are on the rise.

So, Do you feel that 18 is too young to get pregnant?

TAYE AND IDINA OUT AND ABOUT

TAYE AND IDINA OUT AND ABOUT