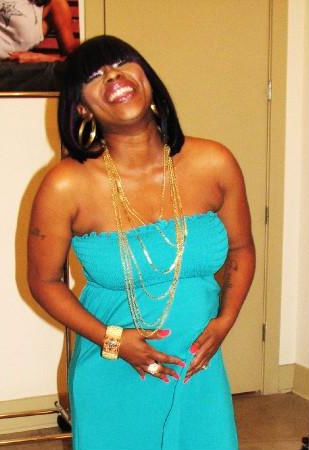 Singer Keyshia Cole’s sister Neffe has confirmed that she is indeed pregnant again after given birth to a baby boy just about a year ago. The reality television has revealed in a new video blog that she is pregnant with a baby girl.

Neffe first revealed that she was pregnant back in March of this year. She told Sister2Sister magazine: “I’m pregnant and I got an attitude with [my fiance] and i don’t want him to … touch me right now—or ever because it was not supposed to happen this way. Now I’m trying to figure this [stuff] out, ’cause I just had Jaylen.”

This baby will be the first for Neffe and her fiance Soullow. Neffe is already the mother of four children: Brianna(pictured), Christare, CiCi, and Jaylen(pictured). Rapper Soullow also has children from previous relationships.

**These are recent pictures of a pregnant Neffe. The middle picture shows Neffe’s youngest child Jaylen, her best friend Dariel, and her daughter Brianna.

Related Neffe Pregnancy News:
Neffe confirms she is pregnant with a baby girl and she talks about her new reality show [Crunktastical]

LAUREN LONDON IS NOT HAPPY ABOUT HER PREGNANCY?