Home » NEWS » LALA VAZQUEZ: ATTACKS ON MY SON GOT ME RILED UP(video inside)

LALA VAZQUEZ: ATTACKS ON MY SON GOT ME RILED UP(video inside) 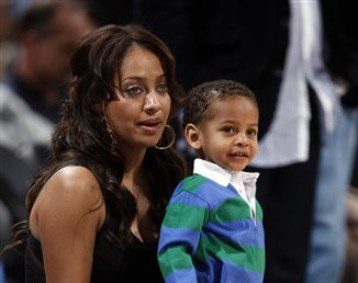 Television personality Lala Vazquez considers herself  to be a ” cool and down2earth” person, but when someone decided to take verbal attacks on her son Kiyan,2,  during a Denver Nuggets game on Monday night, Lala became a little bit heated.

The fiancée to Denver Nuggets player Carmelo Anthony explains in a twitter conversation why she became so irate at the recent game.

” u cant harass a person, call them&their fam n*gg*rs,call kiyan a b*st*rd, push me in the back of the head cuz ur drunk and not expect a reaction”

” im human guys! thats my son. Not a game! All the cameras caught was me going off on the 3 women behind me but never showing why, of course!”

Lala adds, “im prob 1 of the coolest, humble, down2earth chicks u will ever meet (my friends can vouch 4 that) but racial stuff &kiyan attacks is goin 2 far”

“La La Vazquez became distressed during a heated playoff game, after being verbally attacked by some opposing fans, who were using racial slurs, calling her child crude names and throwing ice cubes. She sent her son home early and was preparing to leave herself when she was physically pushed. Although shaken, she left the premises on her own will and is happy to be at home with her fiancée and child.

“Obviously the play-off games bring out the best and the worst in fans but what happened on Monday night with the racial slurs/threats, verbal attacks on my son and physical attacks to myself by irate fans was unacceptable,” states LaLa. “The fans were totally out of control. What the cameras captured was me defending myself and didn’t show the abuse that was taking place.”

UPCOMING:CHELSEA DOCK IS A GIFTED PIANIST

A PREGNANT MAYA RUDOLPH AT THE LETTERMAN SHOW

A PREGNANT MAYA RUDOLPH AT THE LETTERMAN SHOW