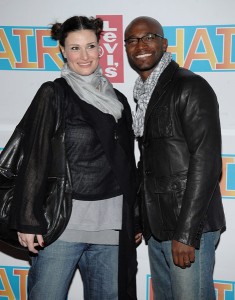 Looks like actor Taye Diggs and his wife Idina Menzel are expecting a boy sometime this year, InTouch magazine reveals.

“Taye Diggs and his wife, Broadway star Idina Menzel, are expecting a son, In Touch can reveal. They are so excited to have a boy, an insider says. Taye especially is over the moon and cant stop talking about all the things hell do with him! The Private Practice star and his wife first met while starring in Rent in 1996 and married in 2003, but Idina had been working on her career. I want kids. As soon as my wife says the word, I’m there, Taye has said.”

GARCELLE BEAUVAIS: THE TWINS ARE SO DIFFERENT

BEYONCE: I PRAY TO HAVE A GOOD RELATIONSHIP WITH MY "DAUGHTER"

BEYONCE: I PRAY TO HAVE A GOOD RELATIONSHIP WITH MY "DAUGHTER"