Home » NEWS » LIL WAYNE:THE MOTHERS OF MY KIDS ARE GREAT!

LIL WAYNE:THE MOTHERS OF MY KIDS ARE GREAT! 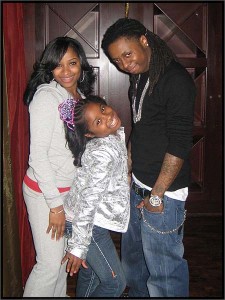 Wayne tells Rolling Stone magazine, “The mothers of my kids are great… If I’m calling at three in the morning because I’m in Europe, they’re willing to jump on that call: ‘Wake up! It’s your daddy’.

He adds, “If I haven’t seen my daughter (Reginae, 10) in two months and want to see her, her mum’s packing her stuff up, asking where to send it.”

Wayne shares custody of his daughter Reginae with his ex-wife Antonia Carter Johnson(pictured).  His second child, a son, was born  last year October 22nd. Wayne helped to deliver his first-born son; he says that his son is “the best thing to ever happen to me, next to my daughter.”

BORIS BECKER AND HIS ONE BIG HAPPY FAMILY