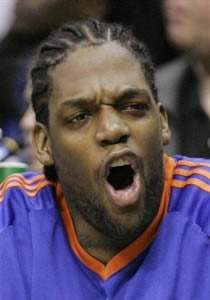 New York Knicks player Eddy Curry has gotten custody of his 3-year-old son Noah Curry, but not without a fight from the boy’s grandmother.

Yolan Henry, Noah’s grandmother, fought hard to keep her grandson and almost didn’t turn the young boy over to his father per the Judge’s order. She explained to reporters last week Thursday, “I have spent the last few months trying to help my grandson adjust to life without his mother, Nova Henry, and baby sister, Ava. Noah clings to me every moment of the day and cries when I am not in his sight.”

Yolan says she plans to appeal the court-ordered decision because “[Noah]  has seen his father twice his entire life …”  She adds, “They never knew my granddaughter and since she’s been dead, [Eddy and his family] haven’t seemed to care.”

Henry has had custody of the toddler since her daughter and infant granddaughter were murdered in their Chicago home in January.