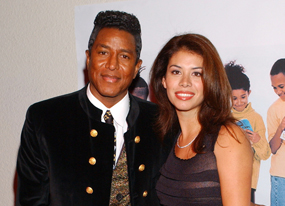 Jermaine Jackson was working on a pilot for a television show several days ago,when he got a call from the LAPD Devonshire Division saying they had picked up his two sons from their school after the 8 year old son. According to Jackson, his son Jermajesty told a teacher that his mother, Alejandra, had been slapping him repeatedly across the face. The teacher immediately called the police.

The LAPD placed Jermaine’s sons, Jaafar and Jermajesty in Jermaine’s custody according to Gary Mitchell, Jermaine’s uber celebrity divorce law attorney. “Jermaine is seeking sole custody of the children and will do all that is necessary to protect and safe guard the children. I will be going to court early next week to address this situation. Jermaine will be seeking sole custody with visitation for Alejandra, but we will be requesting that visitation be monitored.” Gary Mitchell tells RadarOnline.com. “Jermajesty has been missing a lot of school recently, and Jermaine and his teachers want to know why,” Mitchell says.

SOME OLD AND NEW PICTURES OF ACTOR KHALIL KAIN AND DAUGHTER

SOME OLD AND NEW PICTURES OF ACTOR KHALIL KAIN AND DAUGHTER