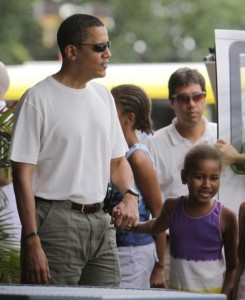 In a recent television interview, President Obama reported that Sasha was taking up his favorite pass time:Basketball.

“Sasha, you know — I think maybe to endear — myself to her, she — she decided she wanted to join a basketball team. So — what more could I want?”

There were indeed a handful a reporters that followed the Obamas around but all of them made sure to keep their distance.

No word on whether or not Sasha’s team won the game.

NICOLE RICHIE IS PREGNANT WITH BABY #2!