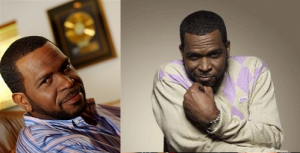 Via MiamiHerald:Rapper Luther Campbell was taken into custody Tuesday night in Miami-Dade County for allegedly owing $10,223.36 in a child support case.

Campbell, the front man for the 1980s rap group 2 Live Crew, was booked into Miami-Dade’s pretrial detention center at around 6:15 p.m., according to Janelle Hall, a county jail spokeswoman.

In a 2 a.m. e-mail to The Miami Herald, Campbell, 48, said “the matter at issue pertained to attorney fees. . . . My payment as to child support was and is current.”

The arrest stems from a Feb. 6 court order issued by Miami-Dade Circuit Judge Mindy Glazer in a paternity case filed against him by Shakera Morgan, according to court records.

JUSTIN COMBS AND HIS MOM AT THE 2009 BABY PHAT SHOW

A DOUBLE TAKE: MORE PICTURES WITH MING, AOKI, AND DIGGY SIMMONS, TOO

A DOUBLE TAKE: MORE PICTURES WITH MING, AOKI, AND DIGGY SIMMONS, TOO