Home » KIMBERLY ELISE IS A GIFTED MOM OF TWO

KIMBERLY ELISE IS A GIFTED MOM OF TWO 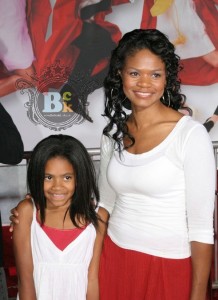 Actress Kimberly stars in TNT movie Gifted Hands, which aired on February 7th. The actress took time out of her busy schedule to sit down with Babble to talk about her movie role as well as being a single mother to daughters Ajableu,18, and Butterfly. Readers will also get insight as to how Kimberly came up with such unique names for her girls.

On being a single mom in the movie “Gifted Hands” and in real life:

“I could totally relate. I was married for many years and then I became a single mother, and that’s definitely a challenging life role. It’s powerful. You approach life in a different way — I could understand her sense of heightened responsibility. When you’re a single parent everything is on your shoulders in every possible way. My situation is much different than hers in that I’m not battling depression and mental illness, and I live in L.A. with my daughters and we have a couple of great family friends who help when I need it. I don’t struggle as much. But I get what it’s like to be by yourself.”

On what’s important to her as a single parent:

“I make sure my daughters know they have no limitations, that everything about who they are is an asset. Being black is an asset. Being a woman is an asset. I also want them to know they should never let anyone tell them anything about them is a liability. And I think it’s important to let them explore the world and to investigate what speaks to them, not point them in any specific direction. But I also want to give them exposure so they can find things and not feel limited.”

On naming her daughters Ajableu and Butterfly:

“Ajableu is eighteen, in college off in Paris. She’s my butterfly flying. And Butterfly is ten. I came up with the name Ajableu because I loved the name Aja, and Ajableu just rhythmically sounded right. Butterfly, she named herself. She had a different name when she was born, but it didn’t fit her. So when she was two she renamed herself. Seriously. She’s been Butterfly ever since.
Actually, he passed away a year and a half ago. But I should acknowledge my boyfriend. He’s been really amazing co-parenting with me.”

On her career and being a mom:

“I always have a little bit of anxiety when a new project comes — I worry about childcare, extended stays, all of that. Although it always works out, and because it always does, my anxiety is lessening. But when I start a new project it has to fit Butterfly and her life — she’s getting to an age where she’s involved in ice skating, gymnastics, birthday parties. She likes to be here, where her world is. But sometimes I get to work with producers like on Gifted Hands who are amazingly accommodating”

IT'S SO HARD TO SAY GOODBYE TO...DISNEYLAND